Do we reach those students that need our support the most? The struggle for inclusive education in The Netherlands

In my educational career of almost 20 years, starting as a teacher at a secondary vocational (‘mbo’) school and subsequently as a university (‘hbo’, tertiary vocational education) teacher, both in urban environments (The Hague and Rotterdam), I became familiar with a vast diversity of students. Some of them seemed very self-confident (sometimes justified, sometimes maybe a bit unrealistic), while a lot were insecure in various ways and degrees. There were many possible reasons for this insecurity, like family problems, divorce-, early parenthood-, financial-, poverty-, social-, physical- mental-, legal-, psychological and/or personality problems. These are all factors that are part of the stories young people carry with them into the classroom, sometimes visible, but often (partly) invisible, that can influence their performance.

Almost all students are in an episode in their lives in which they ask themselves the Big Questions: who am I? What talents do I have? How do I find my place in the world, and what kind of place would that be?

Since the mid-2000’s, it slowly became clear to an increasing amount of Dutch educators and policy makers that talent is something that is not self-evident (an assumption I heard many times during my own juvenile school career) but has to be recognized, acknowledged and reinforced by the teacher. And that teachers are, like all people, biased in their perception of what talent looks like (or should look like). From a broader perspective, it could be the case that many talents remain unnoticed in the existing school system, which is a reflection of the prevalent norms and values in society. This implies that some kinds of talents are higher valued than others, and that the needs of some students are seen and honored more easily than those of others. Teachers are just like the rest of us: they tend to be in touch with students (people) who have much in common with them more easily than with those who seem further away. At the same time, the extent to which the teacher population reflects the student population is decreasing rapidly in many urban schools and universities, especially in and around Amsterdam, The Hague and Rotterdam. Teachers at those schools are traditionally white, middle-class born and raised with at least a master’s or bachelor’s degree, mostly living in suburbs or small towns. Students, however, are increasingly from different ethnical and socioeconomic backgrounds, many of them attending vocational education rather than general (theoretical) secondary education. Many live in the urban areas of the city. 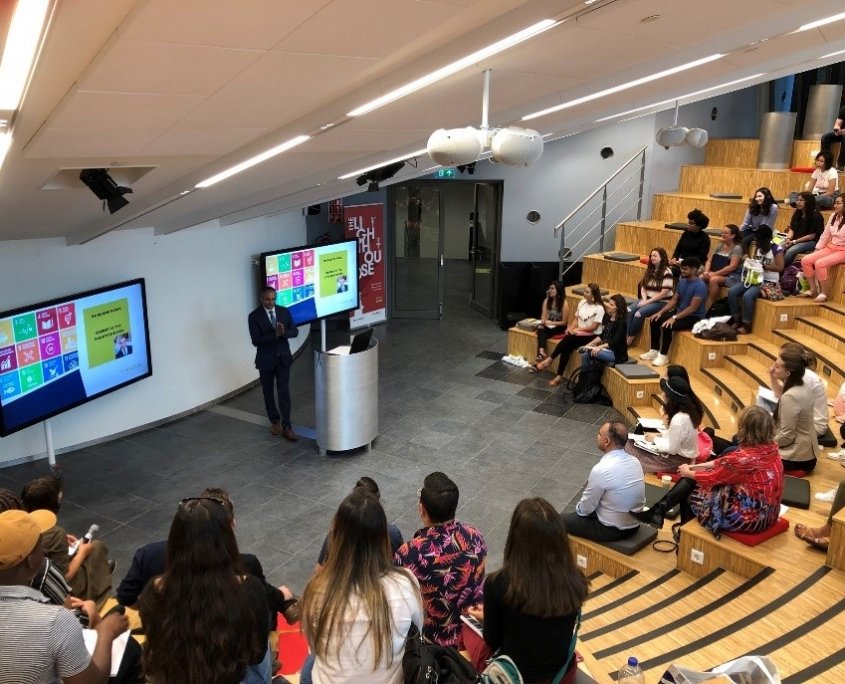 Opening of the Summer School at The Hague University of Applied Sciences by mr. Rawal, director of the Board. The Summer School is attended by international students of 15+ nationalities. Getting to know the city and finding one’s way and feeling at home at the university is also part of the curriculum.

Either way, at the university where I worked, several initiatives to include more students with an increasing variety of backgrounds were put on the rails in the years 2006-2012. These projects were meant to help students being more successful in their studies. They were partly inspired by the work of the American psychologist Vincent Tinto about early dropping-out of college and its underlying causes.[1] Two examples of such initiatives are: summer courses intended to help students reduce deficiencies (most common subjects: language and mathematics) and mentoring services (communities) for specific target groups, including peer coaching. Target groups are students with Dutch-Surinam-, Dutch Antilles-, Dutch-Moroccan, and Dutch-Turkish backgrounds. Although most members of the university community seemed positive about this last initiative, others were critical because of the risk of students being (or feeling) stigmatized in becoming a member of such a community. And this was also the main reason that, eventually, three of the four existing mentoring communities were cut back from 2016 (only the Dutch Antilles community existing up to date). From then, activities were increasingly organized around general themes like study evenings for students who do not have a quiet study place at home. Everyone is welcome to attend.

The aforementioned (free) summer courses were a success in terms of increased performance in students that took them. But they failed in terms of reaching those students who seemed to need them most (in terms of GPA, former education etcetera), and therefore were rather widening the performance gap they intended to tighten.

The fact that it took quite some time for Dutch universities to develop a sense of urgency on inclusive education is, in my opinion, due to the fact that their culture has always been a very academic, content-driven one. Dutch university teachers, unlike their American colleagues, never saw themselves as pedagogues; pedagogy was, and still is, viewed as something for primary and secondary school teachers; university students are young adults that don’t need to be ‘patronized’.

What most of the initiatives in the aforementioned period have in common, people started to realize, is that they are, in fact, systemic top-down measures; they were not taken from the heart of education. From then, the perspective slowly changed towards the teacher in the classroom: he or she knows the students best, and should be able to understand them and identify and satisfy their needs. Not all university teachers, though, see themselves as pedagogues; they merely lecture their subject as experts, being more or less blind to their own biased perception.

Initiatives like Realizing The Inclusive, International, intercultural Classroom and WERKplaats Inclusieve pedagogiek en didactiek, both taken at Rotterdam University of Applied Sciences, show two examples of how university teachers can be challenged and facilitated to become more aware of their own stereotypes and biases, and how these unwittingly favor some students (and disadvantage others).

They research and improve their personal pedagogical knowledge and skills systematically, share their stories and collaboratively evaluate their progress. Teachers who participated in these projects generally indicate that they developed a broader view on who their students are, and on individual needs. They also feel that they developed extra ‘antennas’ for interaction between the students, as well as feel equipped to find words and ways to address sensitive topics.

Not all teachers in Higher Education, however, seem to be receptive to this kind of interventions.

‘Still’ of an animation movie about the Student Aan Zet (“students on the ball”) initiative at Rotterdam University of Applied Sciences (RUAS), that reflects that the organization is aware of the diversity of backgrounds of its students.

Up to now, participating in this kind of projects has always been voluntary; forcing people to accept and internalize the concept of inclusive education would probably be counterproductive. The idea is that enthusiastic adapters will demonstrate the virtues of inclusive education by showing better cohesion as a team and being more successful with their students, and that this will seduce the majority of their colleagues in the long run.

A lot happened in the Netherlands during the last 20 years when it comes to the idea of offering students an inclusive learning environment. The figures, however, are still not very hopeful. We came from far and still have a long way to go. For example, the Dutch finally have to face and process their colonial past, and decolonize their society and education. The real discussion about this sensitive topic, that affects the treasured self-image as a small, innocent, ‘neutral’ country (and people) has started only recently.[2]

[2] As an illustration of such a starting point: Gloria Wekker, a Dutch Gender Studies professor, recently published an impressive and influential sociological study about this topic, which is also available in English: Wekker, G. (2016): White Innocence: Paradoxes of Colonialism and Race. Durham, North Carolina: Duke University Press. This publication generated a lot of discussion and controversy in The Netherlands.

This story is part of Multinclude Inclusion Stories about how equity is implemented in different educational environments across the globe. This work is licensed under a Creative Commons Attribution-NonCommercial-NoDerivatives 4.0 International License.