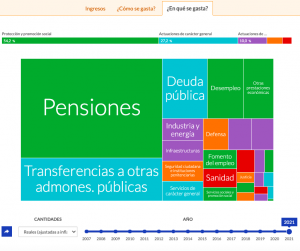 The aim of  the tool   was for citizens to be able to visualize budgets.

The idea for the  tools  comes  from   similar tool from England, but  the tool was made from scratch.  There was interest from citizens and from the administrations of local  municipalities and regions.

It is a tool that has had a great impact, as the feedback has been very positive from users/citizens, to understand how things work.

Some 30 local administrations now use the tool.

We do consider it a success story because of the economic aspect, but more because of the progress it made, as each local administration proposed a step further (e.g. budgets only, then budgets and budget execution, etc.), so the tool moved forward.

The part that has not been so good is that the administrations of the municipalities have not done it to communicate and explain what is going to be done with a new budget. Most of them have published it and that’s it, but what we wanted or would like is that there is a dialogue with the citizen. But it is a first step because, again, in Spain there is no such culture and it is a gradual process.

In the future, we hope that it can serve as a control tool, for example, to write articles addressing  that something has not been implemented, such as oversight  of  budget spending.